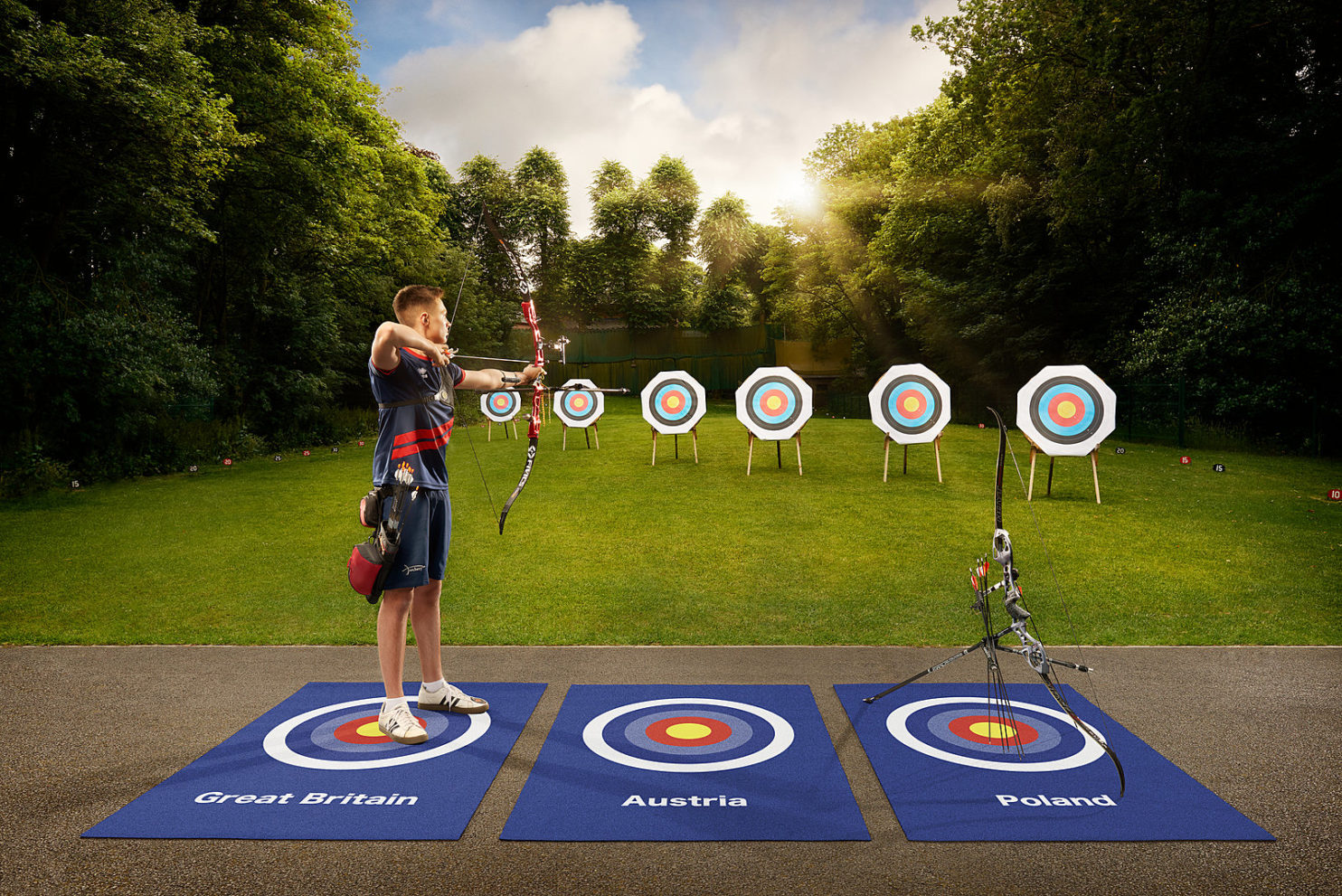 This is a behind the scenes look at the process involved creating the archery image above, which is part of a series created to inspire customers to consider the wider applications possible using graphically enhanced floor mats.

Archery isn’t a sport that i’m particularly familiar with and after the initial concept was decided I had to familiarise myself with the equipment & processes involved.  After a little Googling and cold calling I located a club nearby that could potentially accommodate the shoot and supply the resources needed and were happy for me to visit them to discuss requirements.

I took this recce image at the meeting to see if the location would be suitable which also allowed me to create a mockup visual of how I saw the final image.

Thankfully the grounds were perfect for the shoot and the predicted position of the sun would mean shooting early in the morning for the best control of light, which would also be a bonus to avoid clashing with any members using the site.  Graciously the club also offered the loan of their equipment and a few members were ready to volunteer as models however by chance I had recently crossed paths with a very talented young archer who was perfect for the shoot and was already sponsored by some of the best archery manufacturers in the world.

During the initial recce I took measurements of where the mats would have to be positioned and as with other images in this series we had blank grey mats manufactured specifically for the shoot, this would allow flexibility to retouch any graphic logos afterwards and retain the shadows and texture of the fabric.

To shoot the required style and look the image would have to be made up of a composite of six separate elements partly because we were only supplied with two mats instead of three, I photographed the archer and the resting bow & arrow as two separate images, lighting each one independently to attain the required lighting.

Once the file for each element was processed they were composited to give an initial base plate before the process of retouching and grading the image took place.

In the final composite any stray background elements such as trees & bushes are cleaned up and any marks & flaws are removed.  All the grass and tarmac are also cleaned and the white markings removed.  To add some interest to the blank sky I composited an image from one of my library of stock files. The graphic elements for each mat were then created and manipulated to enhance the texture of the fabric.  The final image is then given a treatment to add styling to complete the image.

You will notice that the recce image from the initial meeting shows that the trees in the background had no leaves, it is often the case that from initial concept to completion the process can take several months.  In this case it worked in my favour but it is something to bear in mind and plan for from the outset.

And the final composite: