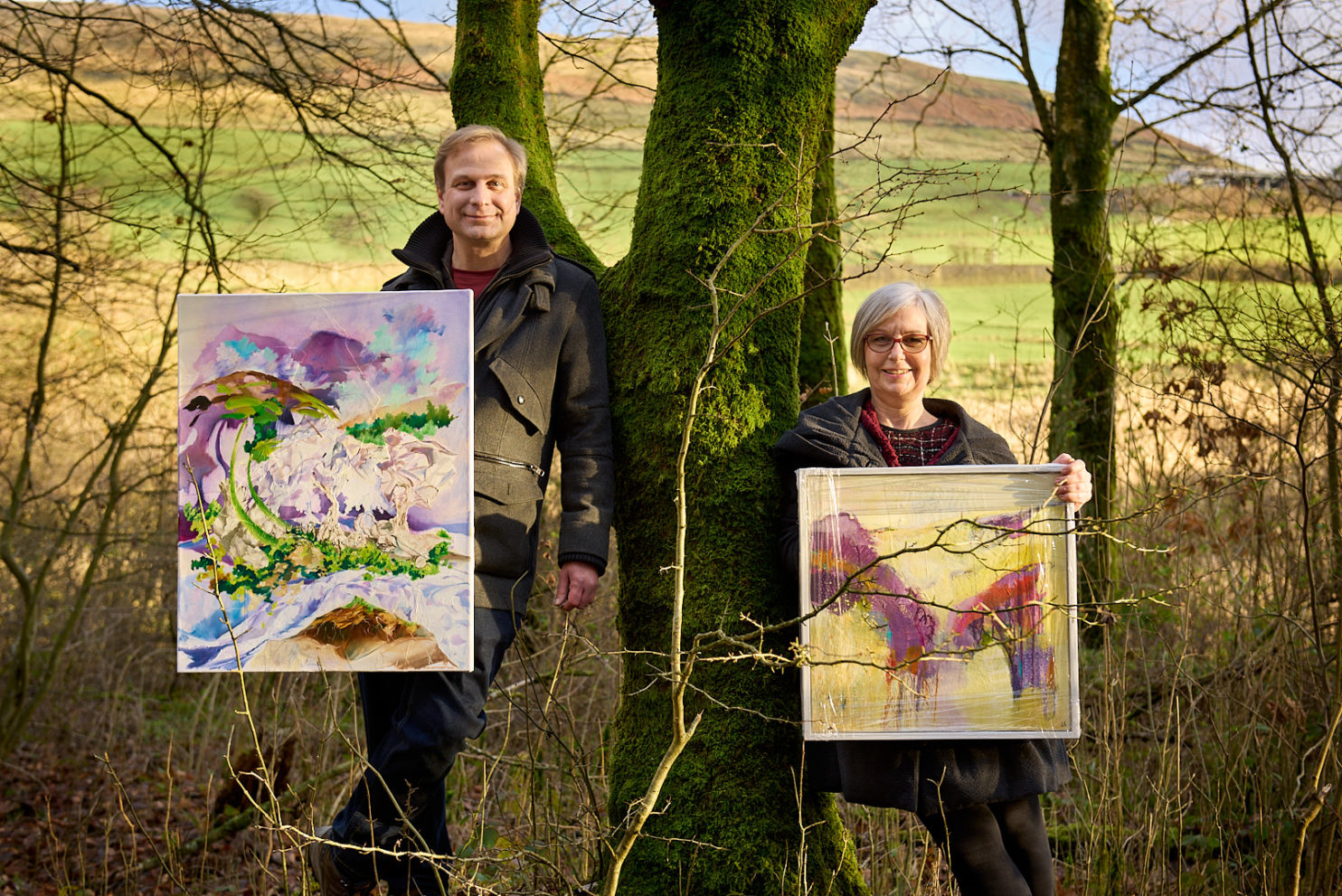 With hundreds of hours of documentary footage accumulated over two years I created an ad hoc storyline about a pair of artists working towards an exhibition in the middle of a global pandemic, bringing together their experiences and explorations into a cohesive narrative.

At the beginning of 2020 I was approached by Hugh Winterbottom and Liz Ackerley to film their journey creating the works for an exhibition to be shown at Gallery Oldham in March of 2022,  little were they aware that a global pandemic was about to challenge them from the very start.

The initial proposal in their brief included the study of locations that would require travelling across the UK, however the restrictions imposed by the pandemic caused them to rethink the overall scope of their exhibition and limited themselves to areas that were in their immediate vicinity and within walking distance from their base.

Fortunately their studios in Mossley are surrounded by a variety of woods, moorlands, hills and valleys that fulfilled the brief and allowed them easier and unrestricted access over the 2 years.  In hindsight the change of plan became a blessing in disguise as it gave them the time to study their subject and develop a deeper relationship with the landscape as it transitioned through the seasons.

At the outset of the project the pandemic restrictions had become intensely restrictive and it was impossible to spend time with liz & Hugh to capture any footage, however they used their phones to film themselves and carried on self filming throughout the process which helped fill the gaps I was unable to capture.

As the restrictions eased I was able to spend more time with them on location and in the studio, filming in a natural and documentary style as they processed and developed their work into finished pieces.  Spending almost 2 years watching them through their creative endeavours I felt on a parallel journey observing their ups and downs and watching them deal with personal and emotional battles which helped me develop an empathy that I felt was important to reflect in the film.

At the outset of the project there hadn’t been a clear vision about the film, we had started the project under the notion that it was important to film the process and develop a concept of the film later down the line.

My experience of observing them over the time naturally developed the underlying storyline and I styled the film into a talking heads documentary, leading the story with a series of questions that would take the viewer on a journey through the film.  This allowed liz and Hugh to express their emotions and feelings in their own voice and allowed me to overlay the captured footage to bring all the elements together into a cohesive narrative.

The final edit of the film was compiled into a 40 minute documentary and completed shortly before the opening of the exhibition and will be played on a loop alongside the main exhibition.

Upon reflection of my experience creating this film, it was difficult for me to know if I had captured enough footage or even the right type as there was no storyline to follow,  if we had filmed the interviews at the beginning of the process it would have given me an indication of what was needed to relate to the narrative, however with the ever changing reality of the pandemic it would not have been possible as the story was constantly changing and developing over the 2 year period.

For any future projects it’s worth bearing in mind to film the interviews at the beginning of the process if the main characters experience is unlikely to change during the process of filmmaking.  There is a lot of unused footage that didn’t fit into the narrative but that is a consequence of this type of discovery process.

Overall I am pleased with the end result, it was a great learning experience and has been well received.  The film is available to watch at the exhibition until June 4th 2022, after which I will create another post with a link to the full film.

If you have found this page searching to create a corporate film please do get in touch to see how I can help tell your story and bring your ideas to life.