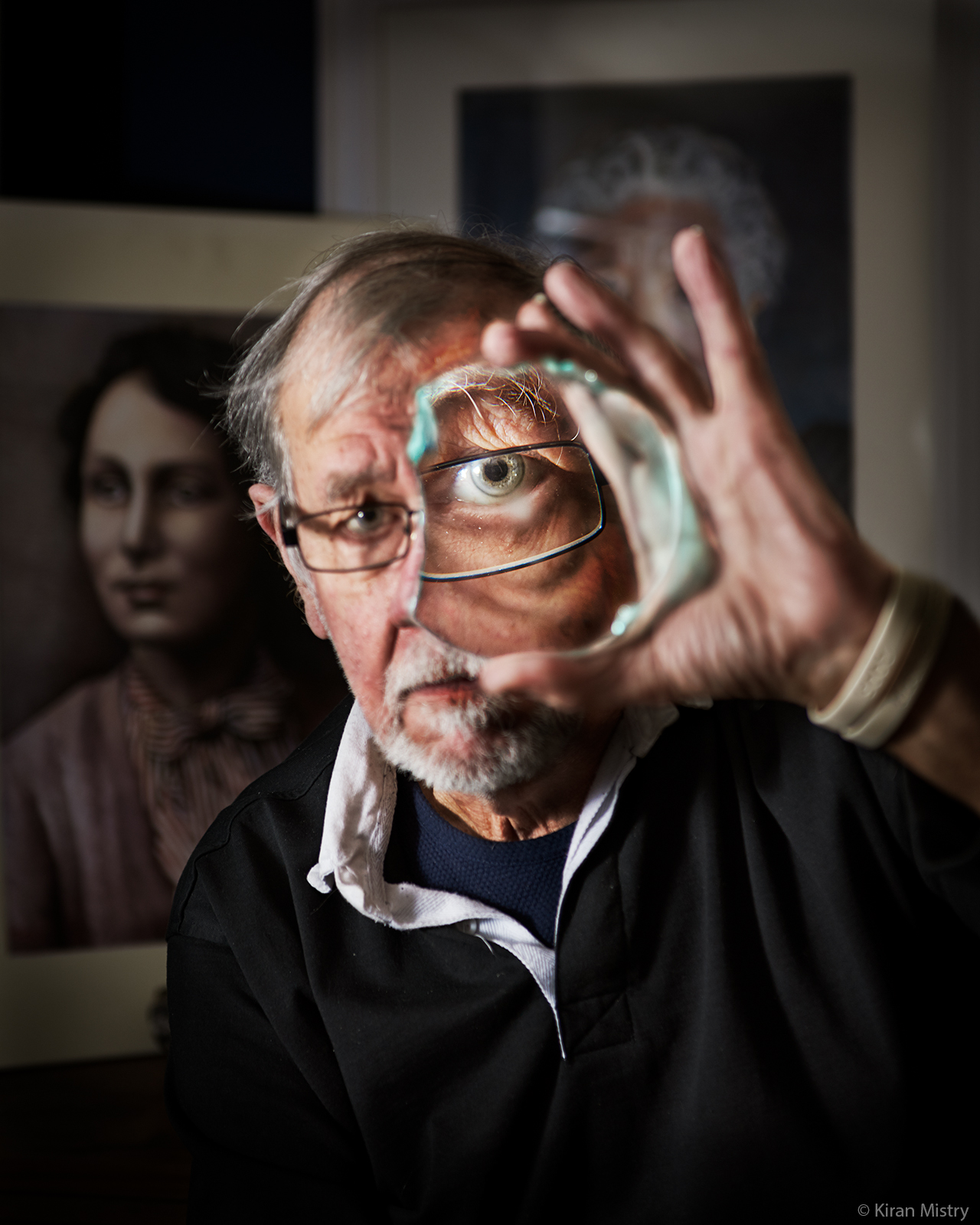 Photograph of artist Gordon Clegg for the series ‘The Artists Tools’

I think it is fair to say Gordon has been the rock around which a community of artist have blossomed.  Firmly planted in the North West and raised in Stalybridge he has been drawing since he was in short pants and from his earliest memories recalls that whilst his friends would be watching football he would be drawing & painting anything from birds, landscapes, portraits to dinosaurs.

With a career as an appliance engineer Gordon found his escape in art and with no formal training he crafted his own highly precise technique and style. Initially practising his art at home before eventually acquiring a lofty studio space at Woodend Mill in Mossley, giving him the opportunity to display a permanent exhibition of his work which would be accessible to the public.

His growing involvement with community artists and social enterprise lead him recently to move his studio to the Peoples Gallery in Stalybridge, which also now holds a permanent gallery of his work. Currently the elected chairman of the gallery Gordon encourages participation from up and coming local artist to exhibit their work and sees it as an essential part of the community offering artist the opportunity of exhibition space and a supportive environment.

Although adept at many subjects Gordon’s primary passion are his portrait studies and has always maintained that it is the eyes that convey the soul of the person, a missing ingredient from any other genre and it is why he is so fascinated by peoples faces, so much so that he always starts a portrait with the eyes and build the face around them. His unique style of portraits have drawn many admirers over the years and has completed many private commissions including Ricky Tomlinson, Bernard Manning and many more, he has also exhibited extensively, including some of the following venues:

ii.  Saddleworth Museum, ‘On The Concept Of Faces’ a series of studies of different ethnicities and famous people.

iii. Saddleworth Museum, shared exhibition of portraits from around the world.

iv.  Gallery Oldham ‘Faces Of The World’ a series of portrait studies of different ethnic cultures reflecting the makeup of the borough of Oldham.

vi.  Currently preparing a new body of work for a shared exhibition due in the summer of 2020 to be shown at Saddleworth museum

You can see more of Gordons work at his website http://gordoncleggcom.moonfruit.com